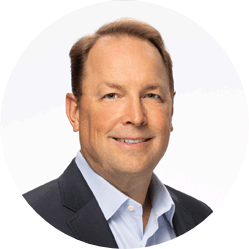 Jon Brinton is currently the Chief Revenue Officer for Crexendo. Jon is a seasoned technology executive with over 25 years of industry experience, and is responsible for overseeing the strategy, performance and alignment of revenue generating operations for Crexendo. Jon’s role is to lead the growth and adoption of Crexendo’s Software as a Service and Cloud delivered solutions for Unified Communications, Collaboration and Customer Experience.

Prior to joining Crexendo, Jon most recently served as the Vice President of North America Channel for Avaya. At Avaya, he led the Channel through an exciting time of transition from traditional Premise Based solutions to Software as a Service and Cloud delivered solutions for Unified Communications, Collaboration and Customer Experience. During his tenure, the Avaya North America Channel achieved over $1 Billion in annual sales through growth and adoption of Cloud and Software as a Service delivered solutions.

In addition, Jon has served in various Senior Executive roles at Mitel. A highlight of his Mitel experience was leading the Cloud Division at Mitel from its formation in 2011 for six years to attain the number #2 Global Market share position for UCaaS Users globally. In this role as EVP and President of Mitel’s Cloud Division, he was responsible for all aspects of the company’s global Cloud business, from sales and engineering, to product line management and operations. In addition, Jon served as President of the companies Network Services Division and held Senior Executive roles managing the Contact Center line of business amongst other responsibilities.

Jon came to Mitel in 2007 through the acquisition of Inter-Tel. At Inter-Tel, Jon had served as President of the company’s NetSolutions Division which expanded to become a 50 state US CLEC business during his tenure, amongst other Senior management roles. Prior to joining Inter-Tel, Jon got his start in the industry in the Channel. He was the President and primary shareholder of Network Services Agency, Inc. a telecommunications agency business representing various US telecommunications providers. After leading this business to set growth records and receiving many Partner awards from major providers, this business was acquired by Inter-Tel in 1999.

Jon holds a Bachelor of Science degree from Grand Canyon University in Arizona, US. He currently lives in the Phoenix area with his wife, Loraine and their family.